I AM PERSUADED THAT HE IS ABLE:

TO NEVER MAKE A MISTAKE (part 1)

This verse tells us that our God will never find himself in a position where He would have to repent. The Greek word for this word “repent” literally has the idea of never having to apologize, or acknowledge a mistake. It means to never be in the position of having to admit that you have made a wrong decision, wrong move, or had a wrong motive. God has never been there.

To be fair, Genesis chapter 6 has something interesting to say. “ 5 And GOD saw that the wickedness of man was great in the earth, and that every imagination of the thoughts of his heart was only evil continually. 6 And it repented the LORD that he had made man on the earth, and it grieved him at his heart.” Here the Bible tells us that God literally came to the point that he regretted having made man. Now a person might say that this is an example where God made a mistake, realized He had done wrong, and acknowledge that He had messed up. But that is not at all what these verses mean. God did not have these feelings because He had messed up. He had these feelings because we had messed up. God is a perfect God, and only creates in a perfect way. But man has always had the ability to somehow mess up God’s creation. That is what sin does. It destroys. God briefly considered ending mankind because He is a Holy God, and “the wages of sin is death”. God‘s justice demands payment for sin. But praise God, in verse 8, “ Noah found grace in the eyes of the Lord”. That means “ where sin abounded, Grace did much more abound”(Romans 5:20). That means Grace will always be greater than sin.

Yes, we make mistakes, but God never does!

I AM PERSUADED THAT HE IS ABLE:

We are also told in clear terms that God is not a man. God does not have the same flaws that man has. God does not have the same nature that a man does. Man, in his weakness, might have a tendency to lie, steal, cheat, bend the truth, take liberties with the truth, embellish details, or exaggerate certain elements of the truth. But God is not capable of doing that. We sometimes find it hard to fully trust God, because we have learned that we often cannot fully trust man. We sometimes put God at the same level of individuals that have disappointed us, or have let us down. If God was like man, then He would be no different from us. If God was at our level, then that would logically place us at God’s level. That means we all would try to govern ourselves and everyone around us. However, God is at a higher level. God is above us, and He is not like us. He is greater, stronger, perfect, and flawless.

So rest easy my dear friend. Today and every day, you can trust Him, because “God is not a man, that He should lie”. 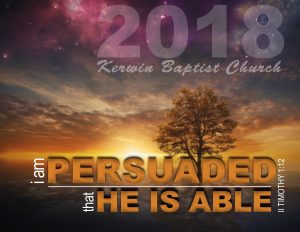 As God laid this theme on my heart, He also laid on my heart to put together a daily devotional for our church and for anyone that would be interested in it. God laid on my heart to write something every day, for the year 2018, about things that I am persuaded that God is able to do. This is meant to be an encouraging devotional. Every day to be reminded, not of what we cannot do, but of what God can do.

This devotional will be available every Monday through Saturday. We will not be doing one on Sundays because hopefully you will be receiving instruction from God’s Word at church. It is my prayer that every day we will become even more persuaded that God is able.

Our church website is kerwinbaptistchurch.com and you can download our church app on your phone through your App Store.

Please join us every day to be reminded of what God can do!